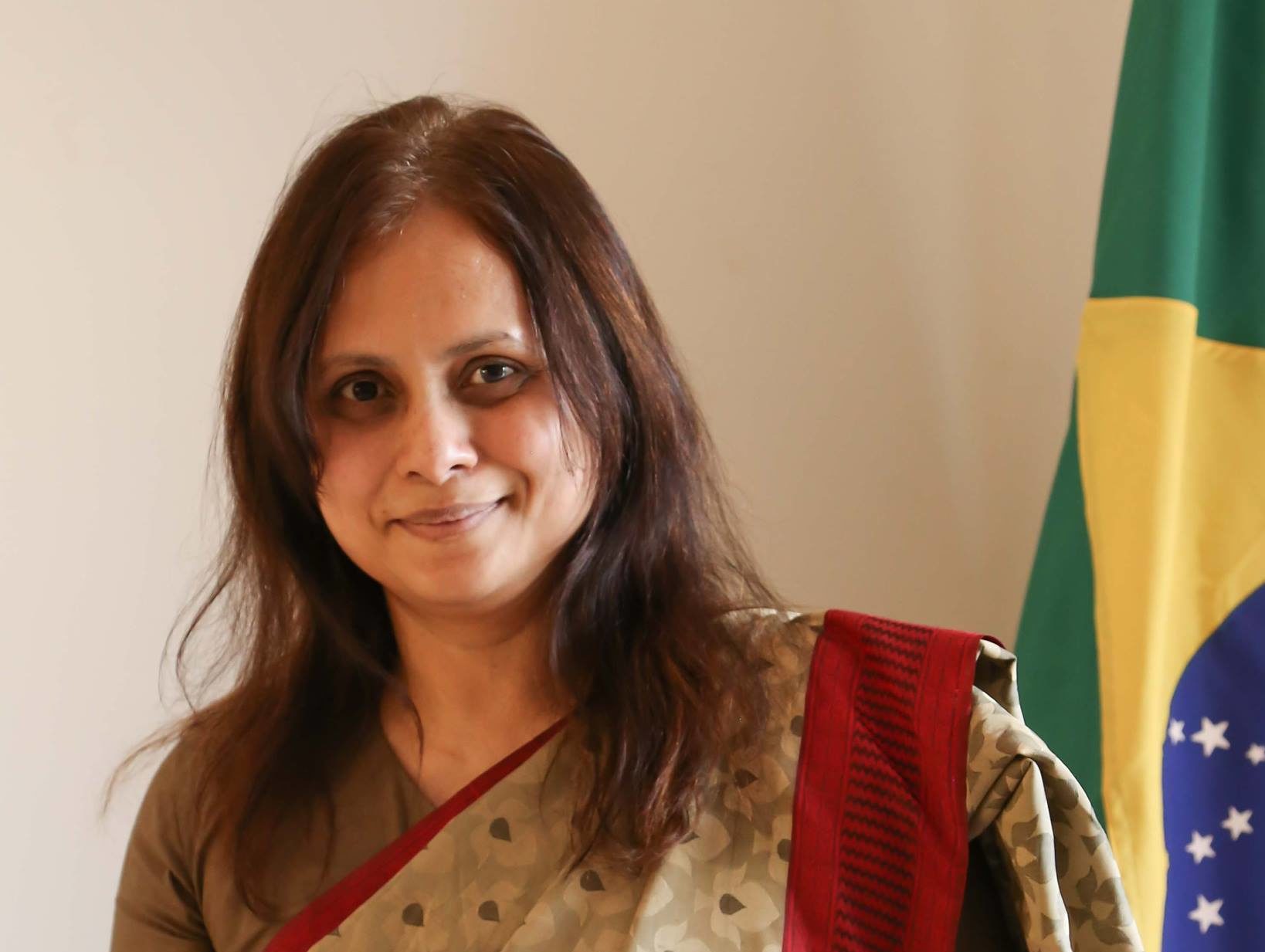 Brasília, 04 de Janeiro,  2018.
For how long  did you stay in Brazil and what  do you consider important in your work done while here?
I completed three years and four months in Brazil. I have been able to make the Bangladesh Embassy visible in Brazil, made important connections and successfully completed signing of a Memorandum of Understanding between Brazil and Bangladesh to have bilateral consultation every year.
– Please feel free to tell us about his country, its cultural and economic aspects and projections for the future of Bangladesh.
My country is small, but our heart is large. Our source of strength is our hardworking and resilient people. We are going to join the middle income club of countries soon. Bangladesh is the third largest peace keeper provider for UN missions. We are going to launch a satetile in the orbit, we are leader in womens empowerment.
– Is there any  scholarship program for Brazilian students to study in Bangladesh?
Not yet. We are trying to have student exchange programs and hopefully we will start working on Scholarship programs.
– Please tell us a little about your diplomatic career?
I joined Bangladesh Foreign Service through a nationwide examination. Completed 20 years in Foreign Affairs – worked mostly in human resources management in Ministry of Foreign Affairs, was Director for Human Resources which is an iconic post. Served as First Secretary in Canberra, Counsellor in Kolkata, Acting High Commissioner and Deputy Chief of Mission in Ottawa and as Minister and Charge d`affaires in Brasilia.
Studied English Literature in Dhaka University(Bangladesh), International Relations and Law in Monash University(Australia) and International Water Law in Geneva University.
Has done defence related Management Course under UK Defence Academy
–Bangladesh and Brazil are two friendly countries. The distance between the countries is
colossal, but will you be surprised if I say the the Portuguese made contact with us
hundreds of years ago? (Shumona Iqbal)
Yes. We were connected. The Portuguese first landed in southern India in 1499, we were
part of that landscape and by the mid-16th century, missionaries and merchants had
established a maritime presence all along the Indian Ocean, Chittagong, the present port
city of Bangladesh, was the gateway to Bengal, our land was known as Bengal then. The
Portuguese missionaries came to spread the word of Bible and to buy spices. At that time
Muslim rulers, known as the Mughals, ruled Bengal. We were prosperous and the
Portuguese were eager to explore our resources. With permission from the Muslim rulers
of Bengal, the Portuguese established themselves in Chittagong, which they called Porto
Grande, or the Great Port. They built forts, churches and military establishments in
Chittagong.Now, I am going to talk a little about the recent history of Bangladesh. We became part of
British India in 1757. After the partition and creation of India and Pakistan, we became
East Pakistan – a part of Pakistan in 1947. We fought a war and in 1971 earned sovereignty
and nationhood. As part of Pakistan, the Bengalis, were oppressed in every possible way by
the ruling Pakistanis. As early as 1952, the Bengalis started to protest: first for right to
speak Bangla, the native language and then for economic and social inequality. Through his
visionary leadership, father of the nation, Bangabandhu Sheikh Mujibur Rahman, led
Bangladesh to its Independence. First Bangabandhu led peaceful protests. However, he had
to retaliate through all out warfare in 1971 when the autocratic Pakistani regime
commenced genocide. Bangladesh is 46 years old now, we are currently a lower middle
income country aspiring to join the middle income club.
Information about bangladesh: Fonte: Embaixada de Bangladesh no Brasil

Bangladesh is included in Next 11 emerging markets by Goldman
Sachs

Ready made garments US$ 50 billion value for exports

Located at strategic advantage – India and Myannar are nearest
neighbors, China not too far.

Bangladesh Economic Zones Authority has the goal to creat 100
Economic Zones within next 15 years to generate 10 million
employment and receive US$40 billion in export earnings.

• VAT Exemption on electricity or taxes on sale (for 10 years)

7. Exemption from Tax on Income from service charges

6. 50% Rebate of income tax on salary income of expatriates for 5 years.

8. Tax exemption on capital gains from transfer of share.

9. Sub-contracting with DTA is allowed.

10. Provision of transfer of shares by foreign stakeholders to local shareholder and investors

12. 80% exemption of VAT on all utility services consumed inside the zone.

14. Re-investment of remittable dividend to be treated as new foreign investment.

15. Foreign loan is allowed in compliance with existing laws.

16. No restrictions on issuance of work permits on project related
foreign nationals and employees but limited up to 5% of total
employees.

17. Royalty, technical fees will be exempted from income tax.

Bangladesh and Latin America:
We had diplomatic relations with Brazil since 1972. Due to economic reasons we had to
shut down our Embassy in Brasilia a decade back, but we re-opened in 2012 and since then
our bilateral relationship is going strong. Bangladesh is small and not resource rich. We do
not have the ability to open embassies in all Latin American countries. In 2011 a fact
finding mission from Bangladesh visited this region and decided to re-open embassy in
your great country – Brazil. Our Embassy in Brasilia is concurrently accredited with Bolivia,
Chile, Cuba, Paraguay and Uruguay.
Economy: Since birth Bangladesh progressed a lot. We have 160 million people and
majority of them live below poverty level. But our GDP growth is steady, 7% a year which is
as fast as China`s. Our Economy thrives on
– Booming ready-made garments industry which now ranks second in the world after
China in exports. Over the past two decades our economy has been boosted heavily
by the expanding garments industry. This industry has also helped in reducing
poverty and giving needy women employment.

– We have 10 million hardworking expatriates working overseas who sends money
home.
During the last decade Bangladesh enjoyed current account surpluses for all but one
year. We receive a lot of foreign aids, loans and some investments. China, Japan, India
and Russia have pledged aids and loans in the power and communication sectors
recently. Asian Development Bank and World Bank are our trusted development
partners.
Bangladesh is the 55 th largest economy of the world, our top export is ready made
garments and top imports are cotton, refined petroleum and wheat. Our traditional
export destinations are USA, Germany, UK, France and Spain. We import mainly from
China, India, Singapore, Hong Kong and Japan.
According to the International Monetary Fund we are making significant progress
towards our goal of middle income status under the able visionary leadership of Hon.
Prime Minister Sheikh Hasina.

Social Indicators: Bangladesh
Nobel laureate Prof Amartya Sen in 2015 remarked in a public lecture that Bangladesh
has performed better than India in terms of economic and social development of
women despite the latter’s faster economic growth. In support of his statement the
Professor stated that in 1990 per capita GDP of India was 50 percent higher than
Bangladesh. Presently, it is 100 percent. Yet, Bangladesh’s social indicators such as
gender equity, women’s empowerment, mortality rate, life expectancy, immunization
etc are remarkably better than India. He added “India can learn from Bangladesh on its
success in gender equity.”