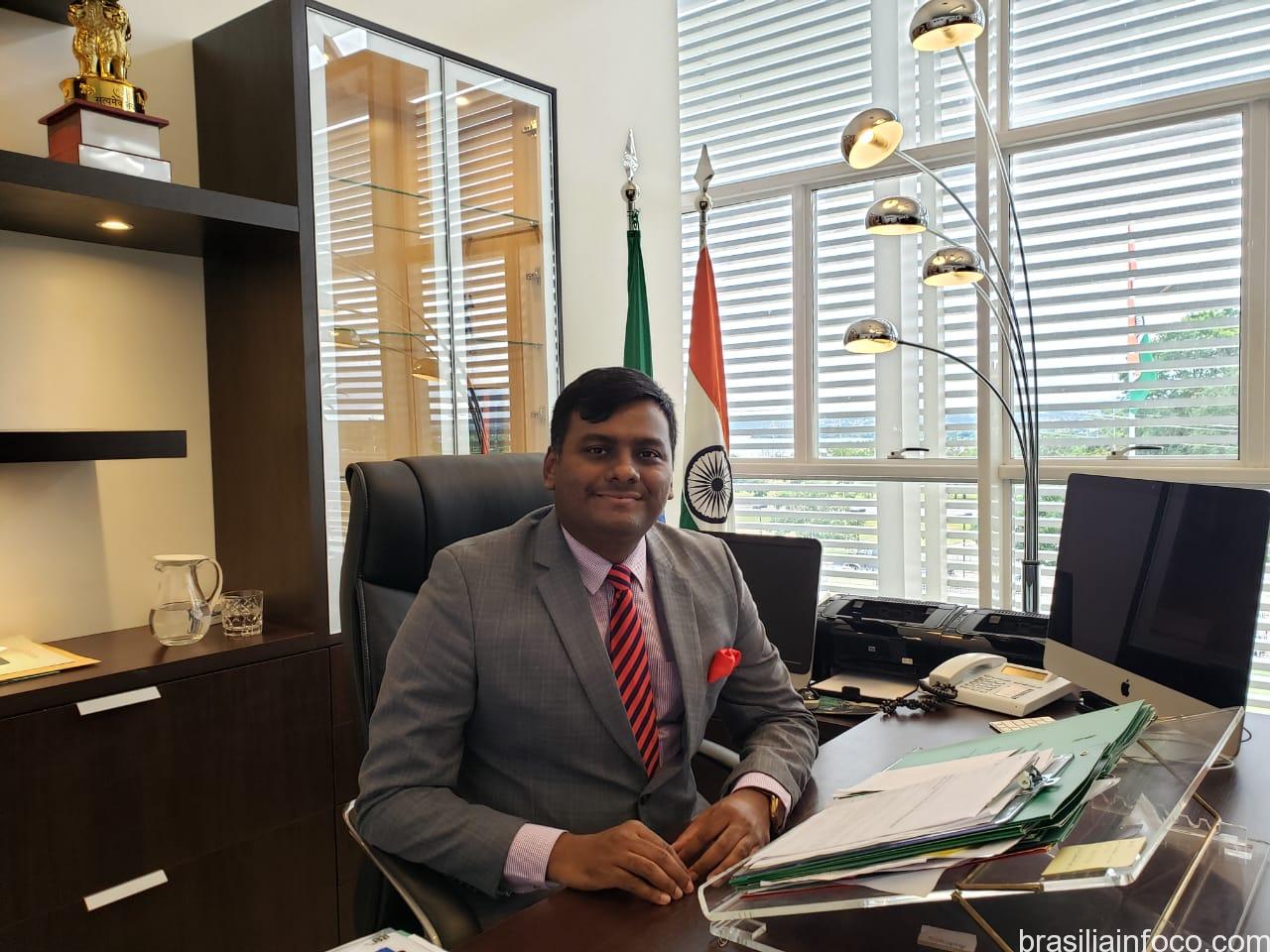 S. Koventhan is Charge’d’Affaires a.i. at Indian Embassy in Brasilia

1. Could you please give us a general background of the recent visit of President Bolsonaro to India last month?

At the invitation of Prime Minister of India Shri Narendra Modi, President of the Federative Republic of Brazil, His Excellency Mr.Jair Bolsonaro paid a State visit to India during 24-27 January 2020.This was the first visit of President Bolsonaro to India. He was also the Chief Guest at India’s Republic Day Parade on 26 January 2020, reflecting the importance attached to our relationship with Brazil. The Brazilian President was accompanied by a high power delegation comprising of Cabinet Ministers, as well as Members of Parliament, Senior officials of the Brazilian government and a large business delegation. The meetings were held in an atmosphere of warmth and trust with the objective of further strengthening the friendly relations and multifaceted cooperation between the two countries. It is important to note that in the last ten months, the two leaders have met on three occasions.

2. Could you please share us something about the action plan adopted between both sides during the visit?

The Action Plan is a comprehensive and forward looking document that outlines action in all spheres of cooperation, including (a) Political and Strategic Coordination; (b) Trade & Commerce, Investments, Agriculture, Civil Aviation and Energy; (c) Science, Technology and Innovation; Space Cooperation; Environment and Technical Cooperation; Health; (d) Defence and Security; (e) Culture and Education; and (f) Consular Issues, Social Security and Legal Cooperation.

3. Wich agreements have been exchanged during the visit?

There are in total 15 MoUs/agreements exchanged during the visit. The details of the MoUs/agreements are available at http://mea.gov.in/bilateral-documents.htm?dtl/32325/List_of_MoUsAgreements_exchanged_d

I believe this is the first time that Brazil has ever signed 15 MoUs/ agreements with any country, during a Presidential visit.

4. What are the plans for cooperation in Renewable Energy?

Biofuels can play a strategic role in reducing dependence on fossil fuels and diversifying our energy mix, and the importance of promoting renewable energies in energy security and efficiency.

We have signed two MoUs with Brazil for cooperation in the field of bioenergy.

Both India and Brazil have agreed to promote reciprocal investments in order to meet their respective renewable energy targets and conveyed their commitment to strengthen the International Solar Alliance and the Biofuture Platform.

5. What is scope for the promotion of Trade and Investmentbetween India and Brazil?

Both India and Brazil had underscored the importance of diversification of trade between the two countries and reiterated the mutual interest in the expansion of India-MERCOSUR Preferential Trade Agreement towards a more comprehensive and encompassing agreement. The leaders also expressed confidence that a realistic bilateral trade target of USD 15 billion could be set for 2022 by both countries.

The India-Brazil Business Forum meeting took place on 27 January 2020 where business community from Brazil and India representing diverse sectors interacted with each other. President Bolsonaro addressed the forum. There is a keen interest on both sides to step up bilateral trade and investment. Just a few days after the visit, there were media reports that Jindal Defence, an Indian company signed a Joint Venture pact with Brazil’s Taurus Armas for manufacturing small arms with an initial investment of USD 5 million.

Prime Minister Modi and President Bolsonaro had reiterated the importance of broad-based bilateral defence cooperation to enhance our strategic partnership. They also agreed to explore possible cooperation in the areas such as cyber-defence and defence systems, among others. We have regular interactions between our armed forces through expert-level exchanges in training, operational and conceptual areas of mutual interest. A high-level business delegation from Brazil and its defence industry has participated in the DEFEXPO 2020 held in the city of Lucknow in India earlier this month. We are also working on convening the first meeting of the Joint Working Commission (JWC) on Defence Industrial Cooperation.

7. Tell us something about the civilian honours given to eminentpersonalities in Brazil?

Coinciding with the auspicious occasion of the Presidential visit, on 25 January 2020, the Government of India conferred Padma Shri, the 4th highest civilian award, on two inspirational women from Brazil, Prof Lia Diskin & Ms. Gloria Arieira, for their contribution in the fields of social work, and literature & education respectively. The recognition is a testimony to the importance that India attaches to Brazil and it’s people.

8. What are the discussions on the area of culture cooperationbetween two countries?

We have signed a Cultural Exchange Programme with Brazil for the period 2020-24, which aims to further promote these bilateral exchanges. During the talks, Prime Minister Narendra Modi appreciated the initiatives taken by Brazil to promote Yoga and Ayurveda in Brazil. For your kind information, India and Brazil will be completing the Platinum Jubilee (75 years) of the establishment of bilateral relations between India and Brazil in 2023 and we want to celebrate this milestone in a befitting manner.

9. What about cooperation in Multilateral forums?

As you are aware that we closely work with Brazil in multilateral forums like UN, BRICS, IBSA, G4. Both leaders reiterated mutual support for their countries’ aspiration to permanent membership in an expanded UNSC. We will continue to closely work with Brazil in the framework of G-4 in order to realize their aspirations to serve as permanent members on a reformed and expanded UNSC so as to make the world body more democratic, representative and reflective of the changed world order. During the talks, Prime Minister Modi thanked President Bolsonaro for reiterating Brazil’s support to India’s membership to the Nuclear Suppliers Group (NSG). He also congratulated President Bolsonaro for successfully hosting the XI BRICS Summit in Brasilia.

In the joint statement issued on 25 January 2020, both the leaders reaffirmed that international terrorism constitutes one of the most serious threats to peace and security and emphasized the need for concerted and coordinated action by the international community, with the ultimate objective of eradicating terrorism in all its forms and manifestations including cross border terrorism. They also reiterated the mutual interest to work closely in the Financial Action Task Force (FATF) in issues related to money laundering and financing of terrorism, State sponsored terrorism, etc.

11. What are the activities conducted by the Embassy for the Brazilian people?

Yoga has gained immense popularity in Brazil. Embassy of India is organizing regular Yoga classes (both in morning and evening sessions). Hindi language classes are also organized for the Brazilian students. The Govt of India also offers scholarship training courses under Indian Technical and Economic Cooperation (ITEC) programme. In 2019, 5 Brazilian professionals have gone to India under ITEC Programme. Apart from ITEC, there are other training courses which are offered to Brazilian diplomats under Professional Course for Foreign Diplomats Programme and Annual Disarmament and International Security Affairs Fellowship Programme offered by

Foreign Service Institute of India. Two Brazilian diplomats have attended these courses in 2019.

Our engagements with Brazil have intensified in the last one year with high level exchanges happening between two sides. It is the right time to take our relationship to a next higher level. I take this opportunity to convey my sincere thanks and gratitude to all stake holders in Brazil, mainly the officials in the Brazilian Government for their continued support and cooperation in the successful conduct of the visit.