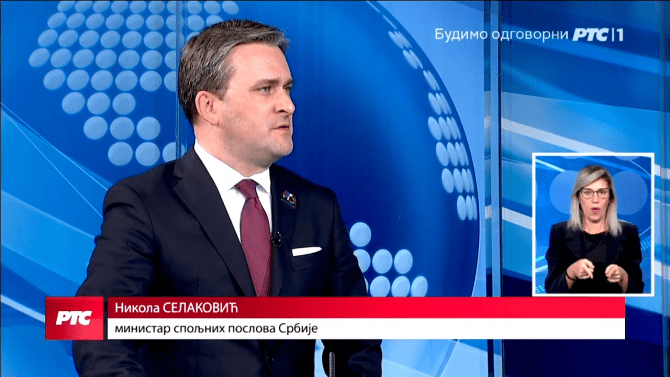 The Minister of Foreign Affairs of Serbia, Nikola Selaković said that Belgrade was the centre of the world during the two-day gathering of the Non-Aligned Movement and that the presence of numerous delegations was a confirmation of Serbia’s international reputation and the policy pursued by President Aleksandar Vučić.

Minister Selaković, as a guest on the Radio Television of Serbia, said that Serbia is sufficiently economically and socially strengthened and that its reputation has increased, precisely because of the policy it pursues, and as a result it was able to host a large number of guests. and show that we have friends and partners both in Europe and outside the continent.

“However, the gathering was organized in the conditions of a pandemic, and the confirmation of the international reputation of Serbia and the policy of President Vučić was evident by the scope of the gathering that ended today in Belgrade”, the head of Serbian diplomacy emphasized.

The idea of organizing a gathering on the occasion of the 60th anniversary of the first NAM conference, stated Minister Selaković, was not only the rebranding of Serbia, but also the confirmation that the member states see Serbia as someone who deeply cares about that movement.

“I have been in contact with dozens of foreign ministers and heads of state and government in recent months, and when it comes to NAM member states, each of them spoke, without a single hesitation and with great enthusiasm, about Belgrade, NAM and Tito and his role”, said Minister Selaković.

According to him, Belgrade remained the birthplace and seat of the NAM and that is something worth remembering.

Selaković said that we are a European country that is on its path to European integration, but we are not Eurocentric and blinded by it, and that we also have traditional friends and partners who live on all meridians.

According to Minister Selaković, one of the many examples of respect for our people and our country is the fact that one village in Guatemala even got its name after Serbia.

“Serbia has many friends, but they are not only there when you need to invite them to vote for something, friendships exist to be maintained and nurtured, and only then they can achieve their full meaning and significance”, the head of Serbian diplomacy emphasized.

As he stated, 555 members of delegations were present at the NAM meeting in Belgrade, and the results of the meeting will be gathered in every respect for a longer period. We will as well analyse in detail how the conference went, from the political dimension to organizational and technical issues.

Minister Selaković stated that more than 6,500 people participated in the organization of the gathering, not only from the Ministry of Foreign Affairs of Serbia, but also from the Ministries of Internal Affairs and Defence, as well as the City of Belgrade.

“These are all great people who worked with such enthusiasm and energy, and there is no better thing than friends from abroad telling you how they have never experienced such hospitality anywhere else and how they will remember Serbian hospitality for a long time. Many of our friends who came for the meeting were in Belgrade in 1989 for the last time, some in the early 80s, some 15 years ago, but all said that Belgrade is completely different today, that the city is rapidly developing and modernizing and that they have not seen so many cranes anywhere else”, said Minister Selaković.