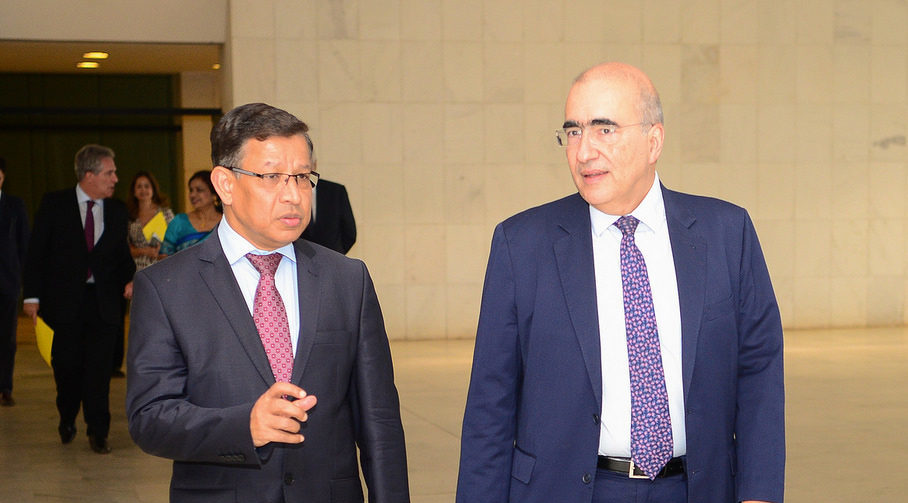 -Dear Ambassador, please tell our readers wich are the areas that you think Brazil and Bangladesh could have more cooperation in import and export products.
-Please explain to us the plans of your government to improve the tourism, because i was there a while ago and noticed that you have many beautiful areas , including Coxs Bazar that should be visited by foreigner tourists.
-Recently Bangladesh became a developing country, can you explain to us what made the country have this growing process and what are the main reasons  that made Bangladesh a developing country.
Please fell free to have any other comments about your country and the bilateral relations with Brazil.
Ambassador Answers:

Thanks for your question on Bangladesh-Brazil relations.
Bangladesh and Brazil enjoy excellent political relations ever since the independence of Bangladesh in 1971. We support each other on most global forums, including at the United Nations. This enviable political relation, however, is yet to be exploited to its full potential—to the mutual benefit of our two countries and two peoples. We have a bilateral annual trade volume of over US$ 1 billion, heavily in favour of Brazil. You would be surprised to know that almost 90% of all sugar consumed by Bangladesh (our population is 160 million) is imported from Brazil, and Bangladesh is a much more important destination for Brazilian agricultural products than its neighbours like Argentina or Chile.

I believe the two countries need to work in this area much more intensely to further
increase trade, and there are lot of opportunities to achieve a much brighter trade
scenario than we have right now. Among other things, high customs duty on importable items from Bangladesh, complicated import procedures, delay at port and in paperwork, etc. have been identified by the Bangladeshi exporters as obstacles towards doing more trade with Brazil.

I understand the Government of Brazil, slowly but steadily, and with firm determination, is moving towards further liberalisation of its international trade regime and the relevant procedures. I also try to impress upon the Brazilian policy makers and business houses to engage more with their Bangladeshi counterparts to further develop our bilateral trade relations.

It is also important that the business companies of two countries regularly participate in trade fairs organised in both Bangladesh and Brazil. While participation of Bangladeshi exporters in Brazilian trade fairs have so far been sporadic, the same from the Brazilian side has almost been non-existent. We need to address this situation to our mutual benefit. Happily, Bangladesh is going to participate in the 3 rd Brazil International Apparel Sourcing Show 2018—to be held in Sao Paulo from 28 to 30 August 2018. Bangladesh is also seeking Brazilian investment in areas such as agro-processing and meat-processing industries, energy, infrastructure, and so on. To be exact, all sectors of investment in Bangladesh are open to Foreign Direct Investment (FDI) with 100% ownership or joint venture. Bangladesh has the most investor-friendly investment regime in our region. Bangladesh’s strategic location—connecting the big and prosperous regional markets of India, China and South-East Asian countries, coupled with Bangladesh’s preferential market access to these countries—makes Bangladesh an attractive destination for Brazilian investment. Our domestic market is also huge, and it is increasing rapidly with the rise of a growing middle-class having good purchasing power. I am also convinced that Brazil—an almost two-trillion- dollar economy has the strength and enormous potential to invest in Bangladesh in a big way.

On your specific question about tourism potential of Bangladesh, I would say that you have rightly identified an area where Bangladesh has huge unexplored potential. Bangladesh has many touristic attractions for foreign tourists. Besides many archaeological sites spread all over the country (such as Mainamati Buddhist Monastery, Kantaji Temple, Sitakot Monastery, Mahasthangarh, Lalbagh Fort, Sonargaon, and so on), Bangladesh boasts the world’s longest unbroken soft-sand sea beach—120 km long—in Cox’s Bazaar! My country is also host to the largest mangrove forest in the world, the Sundarban (beautiful forest)—with majestic Royal Bengal Tiger as its principal attraction. Millions of tourists, mainly domestic population, flock to these tourist destinations round the year, and it is extremely difficult to get a place in a hotel, for example, in holiday seasons.

You have also asked me about Bangladesh’s journey from a Least Developed Country
(LDC) in 1970s to a developing country in 2018. I do appreciate your interest.
Let me say this that Bangladesh is a country of very resilient people. And to prove this
point, I will have to go back a little to our history. In 1947, British left us with a divided
India—India and Pakistan—based, unfortunately on religion. The Muslim-majority
Pakistan had two wings: East Pakistan and West Pakistan. We belonged to then East
Pakistan, the Bengalee-majority part of Pakistan. Bengalees had also been 56% of the
entire population of Pakistan. Yet, Bengalee people were deliberately kept out of
Pakistan’s power structure, and the West Pakistani rulers followed a conscious policy
of cultural apartheid, economic deprivation and political oppression.

Even our right to speak in Bangla was denied by declaring Urdu as the only State
Language of Pakistan. Our protesting students were fired upon and many students
were killed in Dhaka on 21 st February 1952. We used to commemorate 21 st February
since then as our National Language Martyrs’ day—being perhaps the only nation on
earth who had to sacrifice lives to protect their right to speak their mother language. In 1999, UNESCO adopted 21 st February as the International Mother Language Day—as a symbol of the global community’s struggle to protect the dying languages of the world.

After almost 23 years of political struggle during the Pakistan rule, we had to fight a
Liberation War in 1971. In the first-ever democratic parliamentary election held in
Pakistan in 1970, the Awami League party—led by the Father of the Nation
Bangabandhu Sheikh Mujibur Rahman, won the elections by overwhelming majority in the entire Pakistan. Yet, the West Pakistani junta declined to hand over power to Sheikh Mujibur Rahman—the undisputed leader of Bengalee people. Instead, the Pakistani military cracked down on unarmed Bengalee people in the night of 25 th March 1971. Sheikh Mujbur Rahman then declared independence of Bangladesh on that night. The next nine months had been an episode of our gallantry fighting for independence. We lost three million martyrs in the war; and an estimated 200,000 to 400,000 women and girls lost their honour in the hands of Pakistani military and their collaborators in the ‘rape camps’. On 16 th December 1971, Bangladesh was liberated of enemy forces, and we began our journey as a new nation.

When it became clear that it was just a matter of time that the Pakistani forces were
going to be defeated, they adopted the scorch-earth policy and destroyed almost all
roads, schools, hospitals, industries, power plants, i.e., all infrastructures of the
country! Not only that, in an evil design to leave behind an intellectually-disabled
Bengalee nation, they rounded up most of the prominent Bengaleee intellectuals of the country—doctors, engineers, scientists, professors, journalists, artists, writers, etc.—and killed them all in the night of 14 th December, just two days before their surrender.

Thus, we inherited a country totally devastated by the war. Father of the Nation
Bangabandhu Sheikh Mujibur immediately plunged himself into the nation re-building process. But the defeated forces continued their conspiracy against Bangladesh, and he was assassinated on 15 th August 1975—along with his entire family, except two daughters who were outside the country on that fateful night. One of these two daughters, Sheikh Hasina, is now Bangladesh’s third-term Prime Minister, who is relentlessly working to realise the dream of the Father of Nation i.e, to build a Bangladesh free from hunger and poverty that he used to call Sonar Bangla (Golden Bengal).

It is, in fact, her vision and dynamic leadership that transformed Bangladesh from a
Least Developed Country (LDC) to a developing country in 2018. Prime Minister
Sheikh Hasina’s Vision 2021 envisages transforming Bangladesh into a middle-income
country by 2021—at the fiftieth anniversary of our independence. A lot of work has
been done in the past several years in ensuing an inclusive socio-economic
development of our people. The most emphasis has been put on critical sectors like
education, health, women empowerment, infrastructure development, macro-economic stability, steady economic growth, and so on.

This is a fact to be rejoiced that Bangladesh has maintained a growth rate of over 6%
for more than a decade and now has crossed 7%– despite all the global economic
crises and so on. Bangladesh enjoys much better Human Development Index rating
than many richer countries. Bangladesh has been termed as the next giant, in terms of economic development, by all leading global research institutions and rating agencies. All these have culminated into Bangladesh’s fulfilling the three basic criteria for graduating from our LDC status to a Developing Country in 2018. The relevant UN committee declared on 15 th March 2018 that Bangladesh has fulfilled all the requirements—related to Gross National Income (GNI) per capita, Human Asset Index, and Economic Vulnerability Index—to become a developing country. Bangladesh has achieved this success in 2018 against all odds, both at domestic and global levels,
primarily due to the enviable resilience of the Bengalee people—