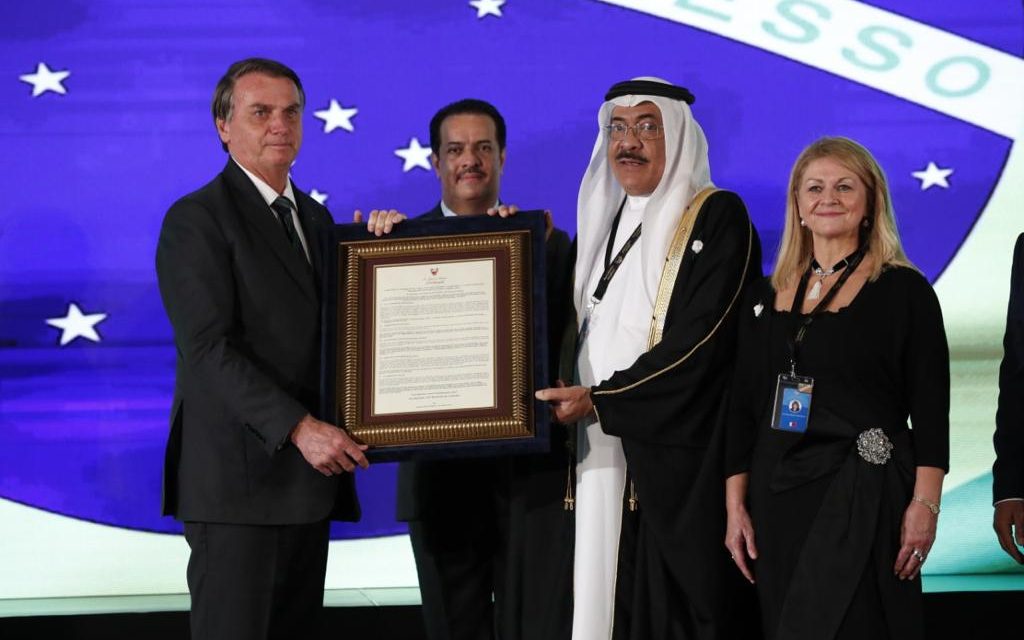 Aiming to promote peace between nations and a healthy coexistence between people of different religions and beliefs, King of Bahrain officially launches declaration for the first time in Latin America

Faith and religious expression; Freedom of choice; determination of God’s will; religious rights and duties; and the expression of faith. The Declaration of the Kingdom of Bahrain is based on these five principles, a text formed on July 3, 2017 by the king of Bahrain, Hamad bin Isa Al Khalifa.

To celebrate the official launch of the declaration in South America, the President of the Delegation of the King Hamad Global Center for Peaceful Coexistence and a member of the Bahrain royal family, Sheikh Khalid Khalifa Duaji Alkhalifa came to Brasilia for the first time, directly from Manama, the capital of Bahrain , for reception and dinner at the Hotel Royal Tulip.

The event, which took place on Wednesday (December 16th), was attended by President Jair Bolsonaro and several other ministerial authorities.

Within the purpose of highlighting the importance of peaceful coexistence between religions and in the context of the release of the declaration, Sheikh Khalid Khalifa Duaji Alkhalifa will participate on Friday, December 18th, in an event at the Antiochian Orthodox Church of São Jorge, a temple designed by the architect Oscar Niemeyer in 1986. And on the 20th, it will be the turn of the Metropolitan Cathedral Nossa Senhora Aparecida, one of the most emblematic monuments of the capital of Brazil.

“Ignorance is the enemy of peace. Therefore, it is our duty to learn to share and live together by the principles of faith, in a spirit of love and mutual respect”, affirms King Hamad bin Isa Al Khalifa, as stated in the Declaration of Kingdom of Bahrain.

With about 1.5 million inhabitants, the Persian Gulf archipelago located to the east of Saudi Arabia places respect for faith and other religions as an inalienable right of human beings and rejects the imposition of religious observance.

The Declaration of the Kingdom of Bahrain also firmly rejects terrorism, the preaching of hatred and violence by extremist clerics, the encouragement of radicalization, suicide bombings, violence, and the abuse of women and children.

In reference to religious freedom, the Declaration of the Kingdom of Bahrain states that “each and every individual has the freedom to practice their religion, as long as it does not harm others, respects the laws of the country and accepts spiritual and material responsibility for choices “. The document also stresses that everyone has an active role in creating a fully inclusive environment, which promotes mutual respect and cooperation. Finally, he argues that faith is a foundation for peace in the world.

The event in Brasilia was a success and highlighted the strong bilateral relationship between the Kingdom of Bahrain and Brazil.