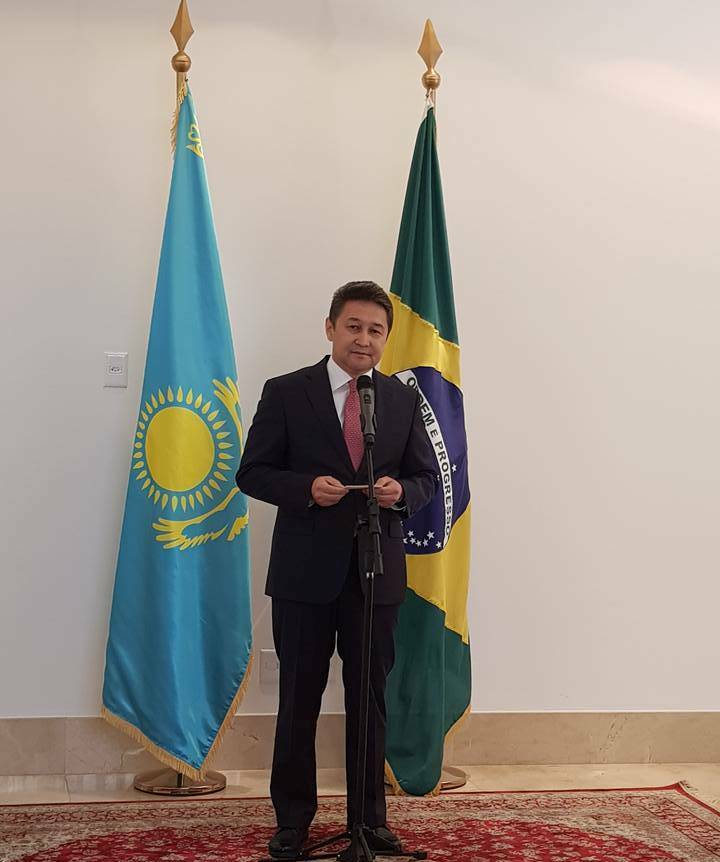 Last year on 16th of December we marked the 25th anniversary of our Independence. Over the past quarter of a century Kazakhstan has built friendly and constructive relations with all countries that are interested in developing cooperation with our country.

Today Kazakhstan’s diplomacy plays a significant role in the international arena. We have launched vital international projects, including the Conference on Interaction and Confidence-Building Measures in Asia (CICA) and the Congress of Leaders of World and Traditional Religions. Kazakhstan presided over such major international organizations as the Organization for Security and Cooperation in Europe (OSCE) and the Organization of Islamic Cooperation (OIC), while continuing to engage in the promotion of the most important global and regional initiatives such as the creation of a world free of nuclear weapons, and the Eurasian Economic Union. We joined the World Trade Organization in 2015. We effectively mediate in conflict resolution. Here, I would like to highlight the Astana Peace Process on settling Syrian crisis. From June to September the capital of Kazakhstan – Astana is hosting international exhibition EXPO 2017 with the theme “Future Energy”. 115 countries and 22 international organizations participate in this global event.

Another achievement of Kazakhstan’s foreign policy is a non-permanent membership of Kazakhstan in the United Nations’ Security Council for 2017-2018. It gives an opportunity to strengthen cooperation with traditional partners and develop relations with new ones in Latin America and the Caribbean, Africa and Oceania.

The Latin American region is new for us, but we attach great importance to the promotion of cooperation with this huge continent.

For me personally, it was a great pleasure to begin my work in Latin America as an Ambassador of Kazakhstan to Brazil. I would like to emphasize that we have always considered Brazil as one of our key partners in Latin America. Since the establishment of diplomatic ties, Kazakhstan-Brazilian relations have witnessed stable development marked by goodwill, friendship and cooperation. We deeply appreciate that Brazil was one of the first countries to recognize the independence of Kazakhstan.

The maintenance and development of friendly relations, the strengthening of political, economic and cultural partnership certainly depend on the hard work of diplomats and people, who are committed to enhancing ties between the countries.

In this regard, on the occasion of the 25th anniversary of the Diplomatic Service of Kazakhstan, our Government has established the commemorative medal “25 years of the Diplomatic Service of the Republic of Kazakhstan” to award our foreign partners for their enormous contribution to the development of strong bilateral relations. Therefore, today on behalf of the Minister of Foreign Affairs of Kazakhstan I would like to solemnly award this commemorative medal to our Brazilian partners.

In accordance with the order of the Minister of Foreign Affairs of the Republic of Kazakhstan, Mr. Kairat Abdrakhmanov, № 11-1-3/460 as of June 23, 2017, for his significant contribution to the development of Kazakhstan-Brazilian relations the commemorative medal “25 years of the Diplomatic Service of the Republic of Kazakhstan” is awarded to the Director of the Department of Central, South Asia and Oceania of the Ministry of Foreign Affairs of Brazil, Mr. Ary Quintella.

Mr. Quintella, it is a great pleasure to work with you and your departmental team. I am very grateful for your assistance in organizing the recent visit of Kazakhstan’s Deputy Foreign Minister to Brazil. Both Kazakhstan and Brazil have a lot of initiatives and promising projects aimed at strengthening our relations, therefore I look forward to our further joint fruitful cooperation.

It is my honor, Dr. Riedel, to present you this medal in order to emphasize your extraordinary personality, aiming to bring peace and prosperity to all humanity, and your inexhaustible commitment to bringing Kazakhstan and Brazil closer to each other. I wish to express my sincere gratitude for your support of our President Nursultan Nazarbayev’s internal and foreign policy initiatives and we very much appreciate all of your opinion about Kazakhstan, its politics and people.

Thank you very much. I would like to invite you to enjoy the reception now.